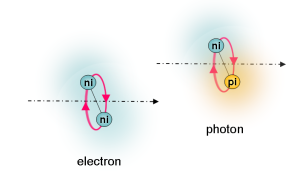 The problem of the presence of torsion fields in ordinary matter has been raised by Sergey A. Vasiliev1, as a necessary element for the occurrence of the phenomenon of entanglement. He does not call it directly a torsion field, but a non-energetic interaction with superluminal speed. Nevertheless, it is the same thing. He indirectly demonstrates that non-energy fields are able to direct energy processes, including the conversion of one form of energy into another. He uses the example of the dependencies of distant astronomical objects that cause changes in the Shnoll detector, for instance, while the incoming energy is too small to trigger any change. And Shnoll himself considered these interactions to be non-energetic. Vasiliev’s next observation is that microcosm particles that are sensitive to non-energetic fields must have such fields themselves. And, further, he claims that all material bodies have non-energy fields. He writes about the necessity of introducing non-energy interactions into quantum equations (of course not to the Hamiltonian, which expresses energy), in order to overcome the long-standing crisis in quantum physics. Vasiliev’s next proposal concerns the corpuscular-wave duality, where the transition of a wave into a particle (and vice versa) is non-energetic, that is does not involve energy change. According to him, non-energy interaction is at the heart of the process of this transformation.1

Taking into account the results of our works 2, 3 (now in the course of publication), which create a new image of the particle of torsion field as a particle of large spatial extent that freezes a copied spatial structure, this particle, or particle from such a family, is a very good candidate for the function of glue connecting distant particles or subatomic particles. We have two issues here: the entanglement of two particles by staying for some time in the same state of external interactions, and the missing link in the photon model. If we assume the photon to be a dipole having two charges, as it was considered by Maxwell and de Broglie in their physical model, then there must be something to connect these charges – something that is independent of their electrostatic influence. Two opposing charges, electrostatically connected, are not capable of satisfying the experimentally well-proven E = hν dependence, where h would be the constant angular momentum of two subatomic particles of some mass and opposite charges. As some authors postulate, the rotation diameter of such subatomic particles is 1/2λ, and their local velocity 2c. It is obvious that when the linear velocity of a quantum of energy is c, its internal motion will be somewhat faster, and it does not limit the assumed dependence that a particle which transfers energy cannot move in space carrying energy faster than c. One could tamper with the calculations by employing some tricks for small high-energy photons, but when we come to photons that correspond to microwaves or radio waves, where their dimensions are centimetres and kilometres, any electrostatic binding of two tiny electrical charges loses sense. The photon and electron models I have adopted, which consist of two subatomic particles (nicky and picky, for they are tiny), are shown in the figure at the top. An analogous model has been adopted by Konovalov4, who extended it, using a higher number of contained subatomic particles, with muons, protons, and so on. The strength of these models is the explanation of the mechanism of electron–positron annihilation5, the explanation of the phenomenon of polarization, the compliance with the laws of conservation, which are violated in standard models with photon creation from nothing, as well as a logical three-dimensional image. Of course, the weakness of this model is the mechanical way of linking these two subatomic particles, which before the discovery of spatial characteristics of torsion field particles2, 3 could not be logically explained (mathematically, anything can be described). At present, it is possible to integrate into the above models a torsion field particle combining two charged subatomic particles. This would not only solve the problem of linking these subatomic particles, but also of the affinity of torsion fields to photons3, atoms6, and elementary particles6. This hypothesis also offers the possibility of carrying out further research on the properties of torsion field particles in their interaction with matter. Here, of course, some problem, instead of disappearing, has only shifted to a further position, namely how a torsion field particle is to catch charged subatomic particles, which do not interact with the torsion field. Unless it surrounds them…

Torsion field particles generally satisfy all optics relationships pertaining to photons, however, they are more like microwaves than light. It is for microwaves that typical dielectrics exhibit a fractional refractive index, which results in a total external reflection in waveguides, and the wave may be a few millimetres in length as in the case of torsion fields. In both cases, diffraction, interference, refraction and dispersion on the prism, circular polarization, interaction with substances with asymmetric structure, specific to one (left or right) polarization, and optical tunnel effect are present. Furthermore, torsion field particles, like electrons and photons, exhibit the phenomenon of entanglement – teleportation. Such high similarity of optical effects for torsion fields and photons leads to the conclusion that in both cases only one of the interactions is responsible for optical effects: either in both cases the electromagnetic field, or the torsion field. And in this situation, where no one has ever found the presence of electromagnetic effects in torsion fields, it can be assumed that in the case of photons it is torsion fields that are responsible for optical effects. We have known for years that many mathematical and physical explanations for some of the phenomena in this field are enigmatic, and even devious, with the – leading among those paradoxes – effect of travelling of the photon through only one slit, while having the “knowledge” of the presence of other slits. This dilemma led to the development of the pilot-wave theory, both by de Broglie and Bohm. The latter, drawing on this theory, developed a new approach to quantum mechanics, which, though having brought no new discoveries, still yields correct results.

It seems that torsion field particles not only keep electrons and photons in their entirety but are universal adhesives at the atomic level and in long range interactions of teleportation. Thus, it becomes clear that in torsion field spectroscopy neutrons are more visible than protons (addition of neutron into an atom move further the position of atom’s peak on the spectrum, then addition of proton.), since more glue is needed to bond a neutron that additionally contains an electron. The more glue, the smaller the deviation angle on the prism; in this way, heavier elements exhibit less deviation, and nonmetals and the noble gases, as they do not form metallic bonds or bonds in general, have less glue, so they slightly step out of line towards smaller atomic masses. It so happens that in theoretical physics there is a high demand for glue. It is not known, for instance, why the matter of an elementary charge does not disperse, repelling itself, etc. And so I thought that if this glue is decisive for spectroscopy, then electrons and photons have the same amount of it – they should, therefore, be found in the same place on the spectrum, but so far I have not seen photons on the spectrum.

That is why I checked it for a semiconductor laser. The signal produced by photons is found roughly where the signal produced by electrons and positrons, beyond the range of atoms, and is a little more blurred. It is also there for light bulbs and for spectroscopic discharge tubes. The overall size of photons, however, is large, and in previous studies they could not fit in small vials. After replacing the vials with larger bottles, the photons showed their presence.

Torsion field particles sit in crystals somewhere between the layers of molecules. It seems that, quantitatively, it is one particle of the torsion field per layer rather than per molecule (but such properties are also exhibited by plasmons and polarons). When we dissolve a teaspoon of sugar in water, we get a homeopathic product with a radiation range of about 200 cm. This experiment dates back to the conceptions and experiments of Nikolai A. Kozyrev, who linked the generation of a torsion field to the change in entropy. Whether the crystal will find the right number of torsion field particles needed for binding, when growing, is still to be determined, but it is known that the growth of a crystal (for example, whether small or large crystals will be formed) strongly depends on the presence of an external torsion field. This is a well-tried torsion field detector, although not very convenient, and in fact the only one so simple. Obviously, the forces here are very short range, as in atoms. In the case of photons of radio waves and in the case of teleportation, we have in turn long range interactions – metres and kilometres. In the case of torsion fields, the widely understood phenomenon of teleportation is not so much a curiosity as a nuisance in the laboratory. When we pour deionised water into two beakers, filling each one with a hundred millilitres, move one of them aside for a few metres, and introduce into the other homeopathic information with the use of an accelerator, we will find in both beakers identical information, with identical radiation ranges. In the case of small vials, the transfer of information occurs with multiple loss of intensity, and then this phenomenon is not so troublesome.

Not only a photon or electron, using Bohm’s pilot wave, can “calculate” the slits during diffraction, but also an electron in the atom “knows” where it would be possible to jump, accepting a photon, and exactly how much energy it will take. Both the number of such places and the amount of energy are strictly limited. As one can guess, the electron does it using a pilot wave. One torsion field particle can contain all this information and somehow “communicate” with the photon, as to whether it likes the latter or else does not notice it. A torsion field particle is not so much able to get to know this information, as it determines, or produces it. In the atom, there must be resonators interacting with light7. Logically, energy differences between unoccupied orbitals and orbitals occupied by electrons will not accomplish the role of precise resonators, while the frequency accuracy of transition, for some metals in the gaseous state, is 10-18. This is the accuracy of the best modern atomic clocks. As E. Wichmann writes7:126, “something vibrates, this something is charged and it reacts linearly to external disturbances”. Accepted by quantum physics as binding, the balance of electromagnetic forces and kinetic energy does not give a satisfactory picture of the atom in terms of its stability, which to some extent is contradicted by: the resistance to external forces deforming the atom, no mutual disturbances between many oscillators, and the mentioned oscillation precision not attainable in technical macroscopic systems.

The above information shows that torsion fields, still underestimated by official science, can completely change the image of our physical reality – and much faster than we might expect.